How to prevent violence in universities

Evidence shows that for universities to prevent gender-based they need to address what drives violence across the entire institution.

Educating for Equality outlines a whole-of-university approach and can guide you to build a university that actively promotes gender equality. 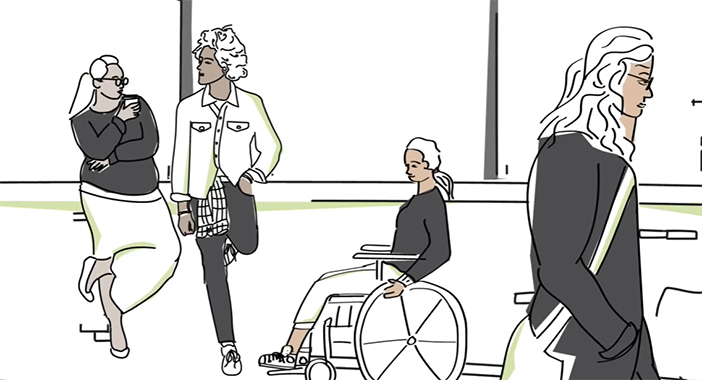 [This video is a hand-drawn style animation. Over a light green background, the video starts showing a book as its cover is being drawn. The drawing is completed revealing the book title, 'Violence Against Women in Australia | Let's change the story’.]

The story of violence against women is a story that must change. And changing this story starts with gender equality.

[The book opens and its pages start to turn rapidly, landing on two title pages, on the left we read ‘INEQUALITY’ and on the right ‘DISRESPECT’.]

Inequality and disrespect are at the core of every act of gender-based violence.

[Another page turns, revealing two groups of people, five women on the left-hand side, and five men on the right-hand side. Suddenly, the five women shrink in size, becoming quite small compared to the men.]

When we don’t treat women equally, we let violence be downplayed, excused or denied.

[Another page of the book is turned revealing a title page that reads ‘Educating for Equality in Universities’.]

So what does this have to do with universities?

[The page turns again, the animation moves in and the content of the book takes the whole screen, landing in a lecture room where two students, a woman and a man, are debating in their respective pulpits at the centre of the room.

Universities create ideas and build knowledge. They are a part of our community.

[The debate gets heated, with the man pointing aggressively towards the woman.]

So when inequality and disrespect exist in universities...

[The animation quickly transitions to two other members of the university community as they look at each other warily.]

… it has a ripple effect on the community and has an influence on who we are and how we live.

[We move to show a man looking at a messaging app on his phone. He sends a nude image of a woman to a group chat. His text message says ‘Check this one she sent me guys!’.]

When online sexist behaviour is excused, it seeps offline into our homes, our streets and our workplaces.

[The animation transitions to show a young man and a young woman at a party. The man holds a drink as he approaches her, talking close to her ear. She clearly looks uncomfortable.]

When we blame degrading language about women on alcohol or stress, we normalise disrespect.

[Another transition reveals two groups of people, three women on the left-hand side and three men on the right-hand side. The women start to fade slowly until there’s only one left, as the three men remain on the other side.]

Even though equal numbers of men and women work at universities, women are still underrepresented at senior levels.

[We transition to show a series of sexist comments like ‘How come she’s the manager?’, ‘She only works part-time!’, ‘It’s only a joke’ appearing inside each speech bubble.]

These sexist attitudes and norms can set a culture in our universities that contribute to violence against women. It’s up to us to change the story now once and for all.

[Students and educators, are in front of a university building.]

This work is about the whole university community.

[The animation transitions to show a man seen from behind. Over his shoulder, we see that he’s looking at one of the students’ books. The book cover is titled 'Business and Leadership' and it features a photo of a businesswoman on it.]

When we look at what we teach, how we teach it – and promote an environment where everyone is valued and treated as equals, we are changing the story.

[The animation transitions to show the front of a university building with a male student walking towards it. Two title boxes pop up on top of the building with arrows pointing towards them. The first one reads ‘Business’, the second ‘Community partners’.]

When we challenge our business and community partners to share our commitment to gender equality, we are changing the story.

[Another page of the book turns, showing a male student in his twenties going through a counselling session with a male counsellor in his forties.]

When we ensure our counselling and health services meet the needs of all staff and students, we are changing the story.

[We transition to show a female lecturer writing ‘ALGEBRA’ on the whiteboard.]

Everyone has a role to play, but if we all come together to challenge gender stereotypes…

[Now we show a meeting room where three people listen to a woman talk.]

[A dad is pushing a pram with his baby in the park.]

[A couple of women sitting on a bench.]

…and are welcoming and respectful to everyone…we will change the story!

[The animation continues, transitioning to a university building as three students – two women and one man – leave the building.]

When everyone within the university recognises their role and takes action to prevent gender-based violence, we can tell a different story.

[A crossfade transition shows the students now in their future professional attire. The first woman becomes a doctor, the second woman a businesswoman, and the man a lawyer.]

A story where everyone has equal power, value and opportunities…

[The screen shows the book again as another page is turned, landing on the words ‘gender-based violence’ written on a blank page. Suddenly, a hand holding an eraser appears from the right-hand side of the screen and erases the words from the paper.]

…and violence is less likely.

[The same hand now holds a pencil and writes ‘gender equality’ in its place.]

Because ending violence against women starts with gender equality.

[The book closes. An end graphic appears revealing Our Watch’s logo in the centre of the screen and a title that reads ‘End violence against women and their children’. Finally, below the logo, the words read ‘EducatingForEquality.org.au.’]

What is Educating for Equality?

Educating for Equality aims to draw together the entire university in a joint effort to prevent gender-based violence. This work needs to be holistic and underpinned by a long-term strategy and sector coordination.

Guidance that outlines the need for universities to take action across five key domains.

A five-step cycle that enables universities to assess how equal and respectful their institution is and identify key actions to make lasting positive change.

A suite of tools and resources

A suite of tools and resources that support universities to take action.

Taking a whole-of-university approach means making sure messages and actions are reinforced in all areas of the university. That’s why Educating for Equality is framed around five key domains.

If universities promote a culture of equality and respect across these areas, they can address the drivers of gender-based violence.

The Educating for Equality process guides you through a continuous improvement cycle to assess your university, identify priority areas and implement actions to embed gender equality.

No two universities are the same so it also allows you to take stock of where your university is at, identify any gaps in your approach and focus on the areas (or domains) that need specific action.

Each of these steps is based on evidence and research. With these building blocks in place, you will be ready to implement change.

This website contains free resources to support every step in the Educating for Equality process, including:

The Educating for Equality step-by-step process

Our Watch is a national leader in the primary prevention of violence against women and their children in Australia.